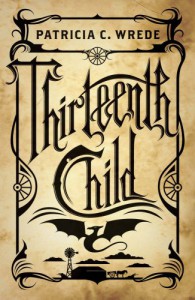 I read and enjoyed Patricia Wrede’s Talking to Dragons quartet (aka the Enchanted Forest Chronical) and the Lyra series soon after they were first published (which dates me, I know).  I wasn’t aware of her more recent work until I went to try to find copies of The Enchanted Forest Chronical for my fantasy-obsessed younger son at our local library.

I enjoyed Thirteen Child, set in an almost US at the time of westward expansion.  The story is centered on Eff (Francine) the supposedly unlucky 13th child and her twin brother Lan, the fortuitous 7th son of a 7th son.  Due in part to the bigotry of her Uncles, Eff’s family moves to the frontier, where her father takes the post of magic instructor at a small college.  Well, Eff isn’t as unlucky as the “Avrupan” (roughly European) numerology suggests and by the end of the book is starting to come into her own, though not through traditional magical channels like her brother.

I admired the matter of fact presence of people of “Aphrikan” descent and the way that their magic was portrayed as just as valid, though not mainstream.  In fact, two of Eff’s most important teachers practiced Aphrikan magic and taught the importance of looking at the world from many different angles and Eff initially found more success with following the alternate traditions rather than the one that nominally fits her family’s heritage.

My biggest criticism of Thirteenth Child is that Eff was only 5 years old when the book started, but she doesn’t really think and talk like a child in the early part of the book.  Her always adult-like voice becomes more plausible when she reaches her late teens.  Portraying children accurately is a difficult task both because most adult authors no longer think like children and that too simplistic a treatment would lose most teen or adult readers.

Coming to Thirteenth Child through my library catalog rather than from previous reviews, I wasn’t aware of the controversy surrounding this book.  While I read, I was totally oblivious to the absence of an equivalent to Native Americans.  It just never occurred to me that they should exist in this alternate world, considering the presence of mammoths, steam dragons, and other magical critters.  Then I go to check the synopsis and reviews as part of formulating my thoughts and discover the whole tempest over this book and the affront that some people took, accusing Ms. Wrede of maliciously revisionist history and bigotry based on her injudicious comments during early online discussions when fleshing out the world-building.  I am agnostic about the controversy concerning Ms. Wrede’s decision to create a blank canvass of available land between approximately the Mississippi and the Rocky Mountains that only needed to be wrested from the elements and the wildlife.  I think her decision to avoid a narrative of unjust seizure of the lands to be settled from the previous inhabitants is well within the bounds of alternate history and that including it would have unnecessarily complicated what was written as a work of fantasy for young adult readers.  So unlike Orson Scott Card, who publically espouses political positions and uses the profits from his books to support organizations I strongly disagree with, I intend to continue to read Ms. Wrede’s work from my local library unless and until provided evidence of Ms. Wrede advocating racist and bigoted view and supporting discriminatory organizations outside in the world outside of the fiction she writes.  And I support your right to decide otherwise.