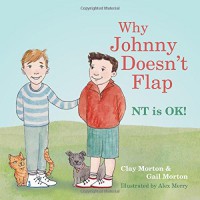 I was wandering through the children’s section looking for picture books for Dewey’s 24-hour Read-a-thon, when I spotted Why Johnny Doesn’t Flap (NT is OK!) on the new books table and it followed me home.

Why Johnny Doesn’t Flap looks at life from the perspective of the unnamed narrator, a grade-school-aged autistic boy (See Note 1), and his friend Johnny who is neurotypical (NT for short).   As my older son said, it’s a book about an autistic dude who thinks he’s normal and the rest of the world is weird.  I’m both thrilled to see this book and a bit disappointed too.

The book never gives the narrator a name, but for the example below, I’m going to call him Austin.

In a two page spread with an ice cream truck, the typical book about having an autistic friend or interacting with an autistic classmate might say something like:

When something exciting happens, Austin doesn’t respond like you would expect.  He flaps his hands and jumps up and down.  He doesn’t smile like you or I might to express his emotions, but that’s OK.

When something exciting happens, Johnny doesn’t respond like you would expect.  He doesn’t flap his arms or jump up and down.  He just moves the sides of his mouth up slightly and widens his eyes.  Maybe he doesn’t know much about how to express emotions, but that’s OK.

The way Why Johnny Doesn’t Flap flips the typical narrative is refreshing.  I love how it gives an insight into why the narrator wanders off during recess rather than playing with the other children. I love the message “Mom says that everyone’s brain is different, and different isn’t always wrong.”  But I still feel the book is flawed.

The book is working so hard to promote a positive view from the perspective of an autistic child.  But in the end, Why Johnny Doesn’t Flap is still focusing on the stereotypical “symptoms” commonly ascribed to autistic individual such as a desire for predictable order, becoming overwhelmed by sensory stimuli, or deep interests in specific topics.  Just as the #Weneeddiversebooks folks often say: how long is it going to take before we have picture books with autistic characters where the topic or issue in the story isn’t the neurotype of the individuals pictured?   I understand that there are many limits to a 32-page picture book aimed at children ages 4-8, and that Johnny Doesn’t Flap had its genesis as a satire of other picture books about befriending someone autistic (Note 2) . But in the end, I was disappointed in it having the same condescending tone as most picture books preaching acceptance of autistic classmates or siblings.

So A+ for positive outlook, but B for still being an Issue book, mostly focusing on externalities, and condescending tone.

In the end, I’m gratified that the library consortium we belong two has bought not one, but two copies and that it is being highlighted on the new books shelf.  I hope it ends up in the hands of the families who need this as the seed to start them on the road to autism acceptance and eliminating the often unconscious bias towards NT being normative and therefore something to be enforced.

1– I am consciously and deliberately using the phrase autistic boy to describe the protagonist.  Before you start shouting that I should call the protagonist a “boy with autism” please understand that the Autistic community generally prefers identity-first language to “person-first” language (see the many links at http://www.identityfirstautistic.org/#!links/cghg).

2 – The book may intentionally be a satire of typical children’s books (see the “Why We wrote it” section in the review at http://www.specialneedsbookreview.com/2016/02/23/why-johnny-doesnt-flap-nt-is-ok-by-clay-and-gail-morton/ )