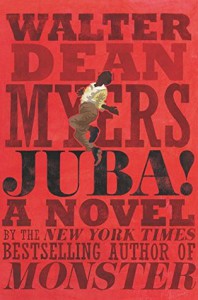 Middle-grade or YA Historical fiction.  Adequate novelization of the story of African-American dancer William Henry Lane (aka Master Juba) in the first half of the 1800's in New York City.  Juba's claim to fame came because of his chance encounter with Charles Dickens, and the subsequent review in Dicken's American Notes. Juba danced in England in the 1850's. It didn't turn out well in the end, but I'll let you read the book to find out why.

In some ways the excerpts from historical documents are the best part of the book. I found the story a bit dry, and it took me two tries to finish Juba!

I'd not previously heard of Walter Dean Myers. Juba! has attracted some attention as being Mr. Meyer's last novel, as it was drafted and I believe in production when Mr. Meyers passed away in 2014.