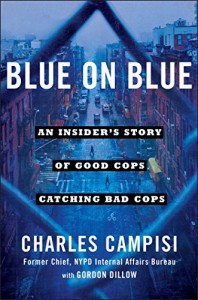 On my last Booklikes-opoly turn, I landed on Frontierland 2: Read a book with a main character who knows how to handle a gun or where someone is shot.  I debated between continuing my re-read of the Foreigner Series by CJ Cherryh or Blue on Blue: An Insider’s Story of Good Cops Catching Bad Cops - Charles Campisi,Gordon Dillow and ended up settling on latter.

Blue on Blue is a random non-fiction book from my local library that came home as part of a haul related to secret service dogs, military dogs, and police that I thought might catch my older son's interest.  Both he and I ended up reading this memoir of Charles Campisi, the recently retired Former Chief of the New York Police Department's Internal Affairs Bureau.  By virtue of his job as a Police Officer, it's a given that Mr. Campesi knows how to handle a gun, and yes several people get shot during the selected anecdotes from 18 years of investigating corrupt NYPD cops.  Son deemed Blue on Blue to be a 4-star read; I rated it 3 1/2 stars.  While Mr. Campesi and his co-author Gordon Dillow tell a clear story with some interesting anecdotes, I just wasn't compelled to keep reading.

This is my first book selected after The Big Shakeup and at 342 pages brings my Bank Balance to $62.