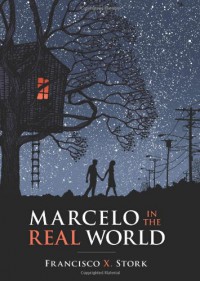 I've been trying to decide what to say about Marcelo in the Real World and it's hard to articulate. While I can see why people might rave about this book, I just didn't like it and had a hard time finishing it.

Part of my discomfort is because certain characters, particularly Wendell the and rival lawyers son, just made me squirm. He was intended to be the antithesis protagonist Marcelo, and perhaps the author went a bit too far into stereotype. Wendell and his father were not intended to be nice people, but I disliked these characters enough not to want to spend time with them.

The other part of my discomfort is that it's hard to write nuanced fiction about people with disabilities. It's even harder for a neurotypical person to capture the autistic experience without being condescending. While perhaps a fairer portrayal than the oft quoted Rain Man, Stork spends just a little bit too long on "I have something like Aspergers, but I don't have Aspergers" and it just doesn't quite ring true to me.