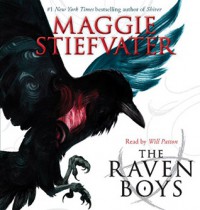 Loved, loved, loved The Raven Boys. Nicely creepy, without too much horror, though the story is rather disjointed at times.

I listened to the audiobook (through Overdrive and my public library) while in the car and then later it filled many hours while I was in hospital. It's funny how you mishear things in audiobooks. I thought one of the Raven Boys was named Ronin not Ronan, which is fitting for his personality/role.

I wish Maggie Stiefvater had explained how Gansey first met Noah/why Gansey asked Noah to live at Monmouth Manufacturing. Perhaps because I was listening to an audiobook I hadn't really registered the pertinent clues about Noah in the early chapters and was quite surprised later on after the reveal.