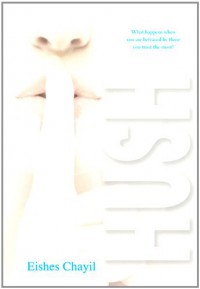 Hush is presented as a fictionalization that combines several incidents from the author's childhood. While the book attempts to shed light on the culture of secrecy within certain Orthodox Jewish communities, and to expose that human evils such as incest and rape do occur within their carefully sheltered world, in the end the the book is fiction. While the author clearly has been part of the culture portrayed in Hush, in the end, the sterotypes are taken just a bit too far and the villains read more like caricatures than characters.

At the same time, Hush is important. While originally written under the pseudonym Eishes Chayil (A Woman of Valor), the author, Judy Brown (or Braun), revealed herself in the after the murder of Leiby Kletzky. I applaud her courage in doing so. It was fascinating to see the backlash against the book and her revelation in the groups that she portrayed.

I don't spend a lot of time watching the news, but it was rather odd to be reading Hush at the same time that the Nechemya Weberman trial was making headlines.
Tweet
943 BOOKS