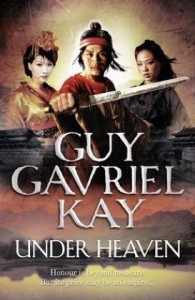 Enough others have summarized the premise/setting of Under Heaven, so I'll skip the info you can find on the book jacket. Despite the few supernatural elements, this book deserves to be shelved and known as historical fiction rather than isolated in the fantasy/SF section.

In general, Under Heaven is a lucious stroll through an almost China replete with spectacular character building. The key exception is Wen Zhou, who in the latter stages of the book seemed too much like a villain charicature undeserving of the role he played. This is my second time reading Under Heaven and I once again found myself weeping uncontrollably when reading about the death of Wen Jian at the culmination of the main storyline.

I agree with the others that suggest that Under Heaven could be a trilogy of books by itself. GGK does a better job than many of interweaving multiple story-lines and several main characters into a single whole for 90% of the book. The ending of the various stories was a bit anticlimatic
with the post-scripts providing the fate of the main characters.